Friday, December 25
Christmas Day began early with the bells ringing in the dark to awaken everyone for prayer.  The service was a long one with all of the bells and whistles, and the girls and I were ushered up to the front where the leaders of the community were seated.  Extra boards had been laid on the floor in the back and along the sides of the building so everyone could have a place to sit in the very full church.  Katherine and I ended up leaving the service to join the other mothers with small children who were standing outside to watch the service.  She loves everyone she meets and chatted away with some of the other children her age. 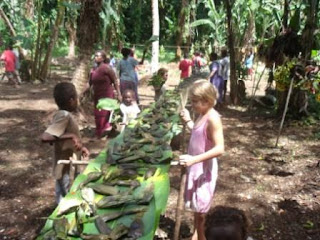 After church, Melissa and Pogo came back again to help us remove our parcels of lelenga from the motu.  We loaded them into a basket and took them over the area for feasting and dancing.  Sticks had been cut and lumber laid on top of them to form tables all around the edges of the square.  Banana leaves were laid on top of the tables.  All of the food was sorted into piles of lelenga parcels and fish parcels and a small amount of rice parcels.  Then it was distributed evenly around the tables.  The women and girls from Marulaon (including Sarah) spaced themselves around the tables and waved the flies away until it was time to eat.  We were asked to come join the table where the village chiefs were eating.  After the prayer, everyone stood and ate with their fingers.  Again the cleanup was easy, just throw away your leaf! 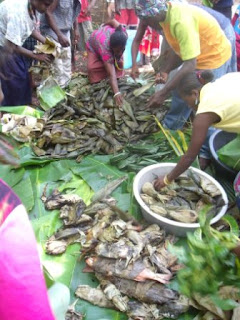 When everyone was finished eating, the speeches began.  One of the leaders asked Aaron to make a speech to introduce our family and let everyone know why we were here.  Each of the leaders made a speech, then the dancing began.  It was beautiful and fun and joyous!  Each village had group of men, a group of married women, and a group of young girls dance.  Everything finally finished up around 4:30 that afternoon. 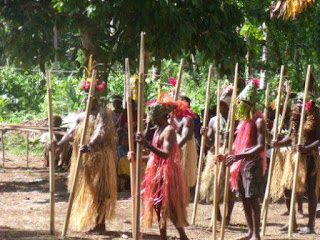 Our water supply is very low in Marulon.  The big tank at the clinic was emptied today, and only one other tank in the village besides ours still holds water.  The chief is keeping tank locked.  We've had a few friends come and ask for water this evening, how can we say no?  We are continuing to pray for rain, lots of it. 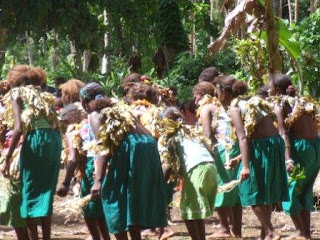 Merry Christmas!! It sounds like it was a full and busy day for you. It is neat to read about the traditions of another country.