Yesterday, we watched as people began bringing bags and bags of coconuts down to the beach because one of our neighbors offered to pay one dollar per coconut to speed up the copra process. I sat down on the beach with Eileen, Naris and Soima while we watched the guys count. We soon discovered that most people brought coconuts in multiples of one hundred because we began to be inundated with people wanted change for a hundred dollar bill! 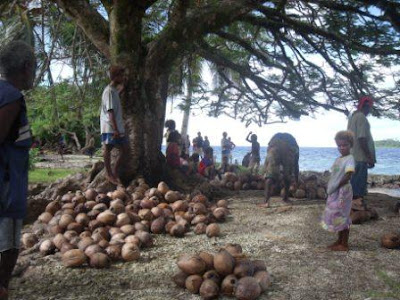 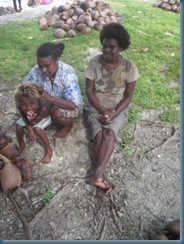 At market this morning we learned that a tsunami warning had been in effect for last night. Many of our neighbors who live on the beach moved to higher ground to spend the night. We saw lots of people walking around around 9 o'clock last night and noticed that people were unusually active early this morning. Most of our village stayed up all night long just in case the tsunami came. They told us they didn't want to disturb our sleep since we were already on high ground. The tide was abnormally high this morning, but thankfully we have heard of no damage or loss of life in the Solomons.

Aaron had asked the translation committee to be ready for transportation at 8 o'clock this morning, but they finally began trickling in around noon. Gotta love that "Solomon Time"! Not all of the committee showed up, even though Aaron had gone to visit the East Russells and taken them money for petrol last Wednesday. He was a little bit frustrated because it's hard to accomplish tasks when people don't show up. As a result, the new translators still haven't been chosen. Obviously, this isn't something that should be rushed, because we want the translators to be prayerfully chosen. 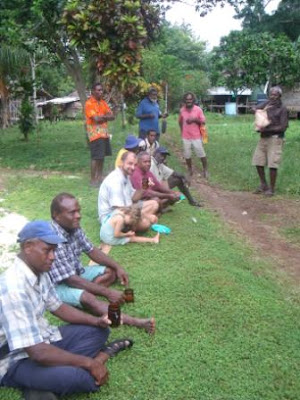 I asked Kiko to help me prepare food for the translation committee. At market this morning, I bought green beans, slippery cabbage, and eggplant to use for serving the committee. Earlier this week, we bought noodles (like Ramen noodles) at Marulaon's small store, and I set a bag with all of the food on the porch. Janet, chief Leonard's wife, came by to see if we had any noodles since the store was out. I gave her a package, and when she asked for some of the slippery cabbage I bought, I told her she could cut some that grew in our yard. A little bit later, I took all of the food down to Kiko's kitchen, and she and I prepared the veggies with coconut milk, noodles, and canned tuna. She had just finished cooking "bun cake" (what I would call yeast rolls) in her little open fire oven. I bought the remainder of the rolls to serve to the translation committee.

After we served supper to the committee (and all the mosquitoes that have been enjoying the abundance of rain), our family came home, read our Lenten devotions, and crashed early, anticipating the early bells for Sunday morning.

So glad to see this post, as we have not had an email to know that you all are ok. Blessings to each of you and to the villagers....we have prayed for you ALL for safety.

The earthquake and tsunami coverage is heart-wrenching.

Such good news that the tsunami didn't affect you or your friends and co-workers!

I just love reading about your life there!

And I'm so thankful the tsunami didn't do any damage or injure anyone!!

To all of you a huge THANK YOU for the delightful package that came all the way from the Solomon Islands. So unexpected and so precious.

As I glanced at the stamps I think I gasped! and then went quickly to the internet to discover the currency values there compared with here. Imagine my relief... :) The cost was still high but $90. and change - not here!

All of you down there have surely been on my mind and in my heart following that massive earthquake and all the tsunami concerns but you really are no nearer than the west coast of Canada. Not much happened here.

I am so very thankful for you and others like yourselves who dedicate your lives in such ways. May the Lord bless you daily - moment by moment.

I love that Katherine is on the translation committee (or that one might interpret the picture entitled "Translation Committee" in that way). ;-)

So glad to see the tiny member of the committee...I missed her the first time I looked at the picture. 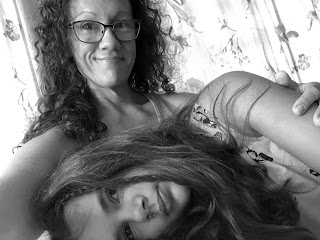