Margaret Rasol showed up this morning with six lovely tuna.  I had asked her to talk to her husband about doing some fishing for us since I wanted to try cooking one of Eta's recipes.﻿  Since our weather has been so windy and rainy on the fringes of this tropical storm system, I never anticipated fish showing up so soon!  Eta was thrilled when I walked over to her kitchen and asked her if she was free this afternoon for a cooking demonstration. 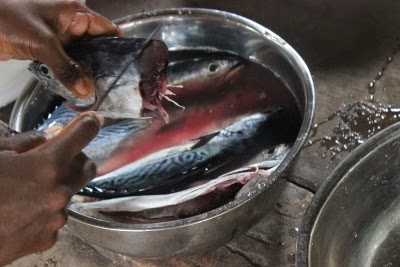 After school, Sarah, Benjamin, and I took down firewood and ingredients to fry up some yummy tuna.  I slipped on the way down the hill and fell, but I kept the basket from spilling out all of our goodies.  I was really thankful the rain let up long enough for us to get together.  It's been raining buckets lately.  Eta cleaned the fish effortlessly, and as she gripped the gills and pulled in one quick, graceful motion, she also kept out the liver from each fish and handed it to a giddy little girl named Maja. 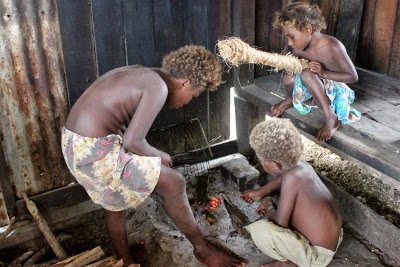 Maja and her friends took dried spines of coconut leaves and stuck them in each little fish liver to roast it over the coals.  They guarded their prizes jealously and ate them while they were still a little bit too hot, burning their tongues in the process. 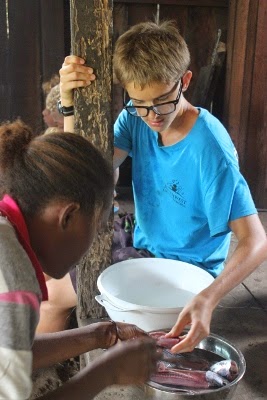 Eta cut up the fish, and we marinated the pieces in soy sauce, powdered ginger, and curry.  Eta's recipe didn't say how long to let them sit in the marinade, and nobody really wanted to wait very long before we started cooking.  So before too long, Sarah and I took turns battering them using powdered egg and breadcrumbs.  Our big iron skillet came in handy as we chopped up some onions and tossed them in to fry alongside the pieces of tuna,.
﻿ 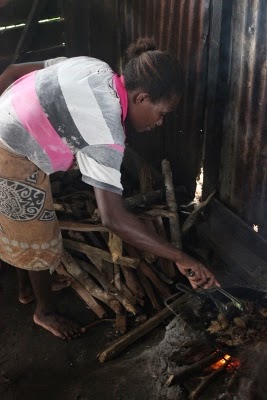 We gathered quite a crowd as the aroma of the cooking fish began to waft around the village, and we had plenty of fish for everybody to get a little taste.  Our evaluation of the recipe?  We decided to mix up the egg powder to a thicker consistency next time, but other than that, the judges overwhelmingly decided in favor of "au hobea!" -- good eating!
﻿ 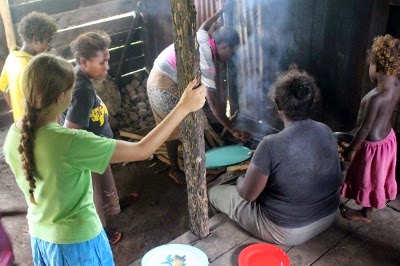